Difference between Construct and New method in AX 2012

Before proceeding further let's understand what is Static Methods:

Normally you can't call a method of a class without first creating an instance of that class.

By declaring a method using the static keyword, you can call it without first creating an object because it becomes a class method (i.e. a method that belongs to a class rather than an object).


Static methods are used for methods that do not need to access to an object's state or only use static fields. For example, the main method is a static method.

Static methods are generally intended for cases where the following criteria are met:

The construct method must be:

The method should return an instance of the class and contain no other code. construct methods should not have any parameters, or else should have the same parameters as the default new constructor (it is recommended that you do not have parameters on new).

For partners and customizers, this is the point to add construction functionality for new subclasses (in higher layers), without mixing code with the construct method in the original layer.

Here I have create a construct method from template, which is returning the instance

Now, finally I have created a job and in this I will get the instance of the class and call the run method in a single call

It is recommended that you do not have parameters on the new method—use static new… methods instead.

X++ does not support method-name overloading. You must create your own individually named static new… methods with different parameter profiles.

This enables you to construct a class in more than one way. Similarly, instead of creating default parameters in a new method, create a different static new… method for each possible parameter profile.

If you have created the new method on a subclass, call super() to carry out any necessary initialization that might be implemented in the superclass.

The call to super() should be the first statement in the method.

These new methods have the following characteristics:
Here newName takes a parameter,

Also in the newName code, it is initializing the instance by calling the construct() method which should be private in this case ,so I made it private

Finally on running it will show 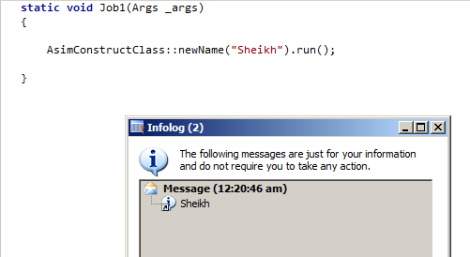 Email ThisBlogThis!Share to TwitterShare to FacebookShare to Pinterest
Labels: Difference between Construct and New method in AX 2012